i sing you to sleep 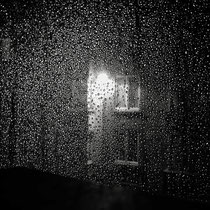 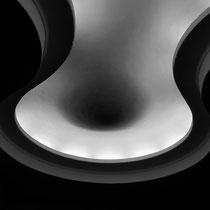 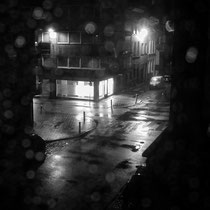 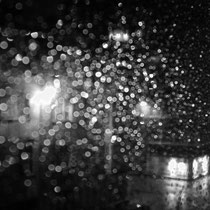 WE ARE TRAVELLERS WITHOUT PROTECTION, WE LIVE ON ENDLESS STREETS

She remains in the bare room for not quite three days.  Then she no longer hears the seagulls.

He opens the window.  The curtain billows, drawn in by a strong breath.  We do not awaken, sleep or dream.  He can no longer perform his daily tasks alone.  I decide to stay, in his apartment, in the city by the sea.  Somewhat without plan, I simply join his existence without having been invited to.  His life is too precious to me to allow it to be defined chiefly by washing: by washing his floor, his windowpanes, his clothes, his bed linens, his dishes, his glasses, his hair, his teeth, his body.

We sit opposite one another.  Our eyes are fixed on the table.  Gradually, it dawns on us that we're also cautiously awaiting his end.  Using the side of his hand, he brushes the breadcrumbs together that harbour our reflective mood.  We decide to have a look at the cupboard's contents.  This is how we seek to introduce a change into the situation, to put an end to the uncomfortable feeling before it ignites.

I lift the cover of a box.  The corners are filled with crumpled paper.  He takes out a disk covered in flowered silk.  Its edge is embroidered with glass beads.  A wreath of small, compact felt bells forms a border around a red upholstered island upon which a small dog sits.  His tail is wrapped around his body, which is made of scratchy woollen material.  His tamed face is covered by catskin ears.  We gaze at the cloister work from the years between the wars and pay homage to the cheerful way in which the nuns created Christmas presents for their relatives' children.  After her first painstaking writing lessons, my mother would have been allowed to clean her quill pens in one of the little violet bells.  We will never learn what induced her not to.

Animated by this find, I now enter each room like a valley, climb ladders from the bottom to its peaks.  We spread out the car maps; we drive through familiar, foreign lands.  We pile up cassette cases without opening them.  Along with office machines, we find tool catalogues, the books on milk, bread and ants, the mail-order flower catalogue, the fish-cooking calendar, the reference work on beekeeping.  "The Campers", a children's book, belonged to my father's brother.  Inside is a dedication: "March 11th 1919.  In memory of happy days spent at Thundridge School.  From his teacher Mrs Thomas."  This is how we learn of the family's approximate return date from England.

The conflicts that have come about in the family continue to haunt him.  He says: "My head is so heavy."

I feel obliged to find a way to somehow lighten this head.

In the eternal ice, I hope to discover a fragment that enables me to give expression to the disturbing feelings that have induced a state in him so deeply emotional that it obstructs all utterance.  Yet realization can be sobering, even as one's own things resist allowing the burden of surging thoughts to drift willingly into a white landscape.  All that remains to me is the choice to build the vehicle for his reassurance myself.  How it's made will be less important than what it is able to effect.  In the midst of his melancholy, a seed should grow that offers soothing shadow to the living space of his chimeras.

I return from an undertaking outdoors.  We take a seat at the kitchen table.  The situation that I would like to describe to him is complex.  As I often do, I take out a sheet of paper and draw: the access from the street, the passageway through the fence, perennials flanking the way, a submerged stone staircase, another fence, an opening, ground swept clear, a table full of confiscated drinks and surrounded by guards, broken branches, dry grass, a nest that has fallen from a tree, another fence, trampled barriers, splinters, an abandoned industrial building, a broad courtyard.  Garages.  The asphalt is cracked; goldenrod has taken over.  Nature returns.

He talks.  After working in the office, he walked across the grounds of the old sea train station.  The adjoining buildings were slated for demolition.

I see him walking resolutely beneath an evening sky.  He combs his wavy hair back with his fingers, a folding ruler in his other hand.  He finds a small building that matches his idea perfectly.  He has the material dismantled and transported.  He rebuilds the structure at the edge of his garden.  From now on, he can park his car inside it.

He draws for me the street where his parents' house stood, the property, the path through the house to the kitchen.  He positions the neighbour’s houses and gardens, his brother's house.

The next day, he once again adds captions and amends the entries of the day before.  As he draws, the map is upside-dawn.  He emphasizes certain letters, writes over others.  He applies the point of the pen to the paper.  Employing small, nearly imperceptible circling movements, with each letter he begins his search for form, transferring his memories onto paper word by word.  Carefully scattering them, he distributes accents like the Easter eggs he once hid in his daffodil borders.  He views the result and notices that the image has been drawn in reverse.

Oostende, the eve before the 6th of December 1964.

Next to the door is a large bowl of water, flanked by an arrangement of carrots and small lumps of sugar.  On the table is my wish list, shaped into a paper cut-out.  The shadow figures are held in place by strings of glue.  Next to me, against the light, is my friend, the elephant.  We are standing in a field covered in stubbly growth.  Between us, my new pioneer spade protrudes vigorously from the earth.  This is the tool I used to build his house, a house of corn that he can eat until the next harvest.  The winter crop has already been planted in the neighbouring field, as well.  Instead of the friend I long for, I receive a drawing whose alien quality infuses me with a deep sense of fear.

I carry an armchair over to the window.  He reads into the cloud panoramas drifting by above.  I sit down next to him.  Casually, I drop a line into the waters teeming with secrets that separate us from the rest of the world.  In their myriad diving attempts, small bright fishes accomplish astonishing encounters.

We study animals and animal people, at home and outside.  The city we live in is home to many refined, rare species, which makes us happy.  On the floor lies the written account of our observations, piled up in sketches.

We ask ourselves where the personal reference might lie.  But before I consider any further, I take fabric and thread and try what many have succeeded in doing before me.  His proximity alone will guide me to the right form.

I take a strand of wool, wrap it in a small piece of fabric, and sew it together.  I then stuff this little roll until it gives rise to a bent sausage.  Using my left hand, I stretch the material diagonally to the weave across the form, which I continue to knead, moulding it anatomically.  I feed a woollen thread through the eye of a needle.  Its naked point penetrates a pore in the fabric, drills its way through its fresh inner life.  Countless times, a thread drills into the entrance, stretches, breaks, frays, tatters, until the streamlined body's dive finally leaves nothing but coloured lines in its wake.

It's evening.  The potatoes are on the stove.  Two guinea fowl drumsticks are simmering in onions.  In the steam of the seething, sputtering pan he uses a wooden spoon to stir a dash of cinnamon into the applesauce as I solemnly hold the first Effigy leg against the light of the humming exhaust duct.